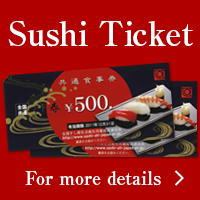 Edomaezushi come with various toppings, including red fish, whitefish, silver-skinned fish. shellfish, shrimps, cuttlefish, and roe. These sushis are molded with nothing but fresh seasonal fish so the variety available is truly amazing. In addition to the characteristic tastes of such full-flavored fish, various cooking methods also enhance and expand the culinary delights of sushi-cooking methods such as handcrafting the sushi with raw toppings like sashimi firming up toppings like silver skinned fish with vinegar, stewing sea eel or octopus.

Different from Edomaezushi (Tokyo-style sushi ) , there is the Hakatamae-zushi in Fukuoka. "Hakatamae" is a Sushi Culture unique to the area. As the name Hakatamae indicates, the topping fishes come from Genkainada Sea. Different from Edomaezushi the topping are mainly white and blue color fish such as squid, mackerel, sea bream or yellowtail fish. The fish toppings are served without adding any special cooking method.

Since the ancient era, Fukuoka Prefecture has been a place open to the sea and has been the gateway for exchange with Chinese continent or Korean Peninsula and also today it is acting as the front door for Kyushu and Asia. Fukuoka is also famous for the delicious food. Surrounded by seas such as Genkainada, HIbikinada, Suonada, Ariake Sea, it is a place full of fresh seafood delights. 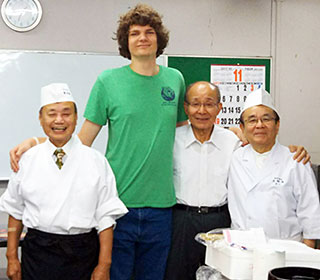 Reasons Why Sushi is Healthy

Sushi was originally a fermented food aimed at preserving seafood. The taste created through fermentation progressed to what we recognize as "Sushi" today.

Sushi’s Roots are in Fermented Foods

An ancient kind of sushi which is currently available in Japan is said to be Omi "Crucian-carp Sushi". It is made by pickling crucian-carp caught in Lake Biwa (Shiga Prefecture) in salt, covering it in rice, and naturally fermenting it. The fish was preserved with lactic acid bacteria, illustrating how sophisticated the ancients were when it came to making fish easily edible. It is thought that alongside rice and its cultivation, fermented foods such as these were brought over from other parts of Asia. By the time the technique of fermentation advanced into a more proper process, sushi cuisine evolved from the crucian-carp sushi and saw other types of sushi becoming commonplace, Such as "Nare-sushi" and "Mackerel Nare-sushi" (referred to as "Namanare") which are eaten with rice, as well as "Tsurube Sushi" which is a pickled Sweetfish. In addition there are many fermented foods throughout Japan Such as Izushi (also known as Iizushi), which are made from pickling fish, rice, and vegetables. Fermented food is also popular in regional cuisine, such as Akita’s Sailfin Sandfish Sushi, and Kanazawa’s Turnip Sushi. 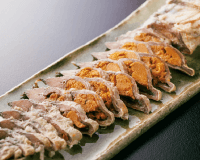 Crucian-carp sushi is the oldest sushi that is still available in Japan. It is made by pickling crucian-carp caught in Lake Biwa in salt, covering it in rice, and naturally fermenting it. It is a rare and pleasing delicacy among gourmets. Nare-sushi such as this are said to be the roots of modern day sushi.

Haya Sushi and "Nigiri Sushi" are sushi which use vinegar in order to speed up the fermentation process. There are also sushi which use sake, sake lees, and koji. Also, with the progression of brewing vinegars, and the covering of fillets of fish in rice, there are also sushi that are made by pressing them into a box and placing weights over them. Sushi eaten with rice include Sake Sushi, Kakinoha Sushi, as well as Kansai’s Oshi Sushi and Hako Sushi. In the Bunka-Bunsei period, vinegar, which became widely available from around the end of the Edo era, came to be utilized for "Haya Sushi" which is made with fish and rice. Nigiri Sushi then came about by applying pressure to it using one’s hands. Sushi has evolved from what was originally a fermented food to something which in modern times is made with vinegar. It is a healthy food that contains ingredients such as acetic acid and citric acid. These ingredients can help relieve fatigue and loss of appetite.